Even though this trail is very though in perfect conditions, we had few setbacks along the way that made though trail even more difficult. At the peak there was still big amount of snow that cowered the trail, so we had a freeride on steep slope. Middle of the train was at some sections congested with baby head sized stones which where along the trail due to snow melting and avalanches. After that, grass was little bit too high and hid some rocks beneath. At the lower parts there was still leaves at the trail that make the trail fun, but also slippery and dangerous if there are stones and drops beneath. All in all, trail was very fun, and for a very long time was on my “to do list”. I think that we were probably first that rode Kanin – Bovec descent this season because we saw no tracks on the snow and at the reception they recommended us not to ride this trail yet due to snow conditions. All in all, I’m glad that we didn’t listen, but I’m sure that we will be back to ride this trail in better conditions. We payed gondola 18 euros (1 person + bike) in one direction and it took us about 40 minutes from Bovec to Kanin. There is a cafe, so you can enjoy at the peak with drinks while preparing for descent. From the cafe to start of descent you need to push your bike 200 meters over saddle. First part is very steep and rocky, later becomes combination of grass and rock sections, and after that we entered the woods. Trail is long 10 km, but almost all the time trail is very though and remains like that until the very end. Trail finishes at the Bovec, so you are very close to gondola, which is good if you parked your car nearby. Be sure to carry with yourself some gps device to help you with navigation, even though trail is pretty straightforward, there are some intersections where you can get lost. 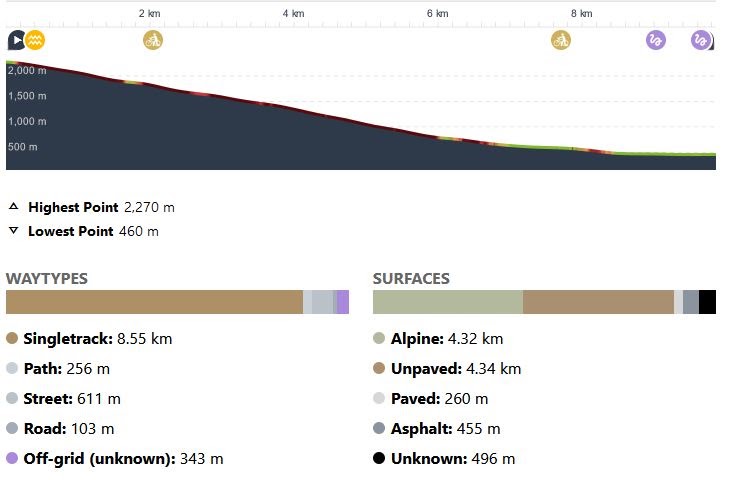